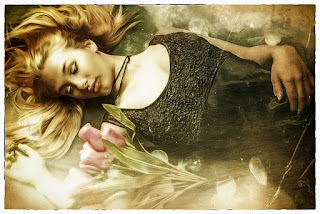 Aurora sighed as she examined the endless piles of laundry in the castle kitchen. She could use another cup of coffee before she tackled the folding. While her household budget had plenty of room for a maid's wages, the dragon lurking outside the castle scared off most potential servants.

Earlier that morning, Aurora had trundled the twins off to school, and she had six hours to herself before they arrived back home. She mentally ran through her list of chores, and then decided she definitely needed a jolt of caffeine.

Aurora managed to squeeze in the narrow passageway, despite the extra 20 pounds she'd gained since turning 35 the year before. Dusting herself off, she looked around a small storage space. A curious contraption took up one corner, a large wooden wheel attached to some sort of pedals. Aurora gingerly approached the device, then realized it was an old spinning wheel.

With a sigh, Aurora sat down on the splintered wooden seat. Maybe she should take up a hobby. Her husband, Phillip, was always encouraging her to take an interest in something other than the girls, but her limited free time seemed to preclude new pastimes. She reached out to touch the needle, and felt a sharp sting before falling into a deep sleep.

Some hours later, a commotion ensued in the kitchen. Phillip and the twins had returned to find no supper, and were at a loss of what to do next. "Aurora, darling," he called out, sounding increasingly desperate.

The twins shimmied through the cabinet opening to find their mother sprawled out on the floor, deep in sleep. "Mom, wake up," they chimed in unison. Phillip followed suit, grumbling all the way. He bent down to kiss her tenderly, the kiss of true love. Aurora stirred briefly, then pushed him away. "Go away, I'm taking a nap," Aurora mumbled.

Posted by Children's Book Author at 10:53 AM No comments: